First a word or two about renting a car in Iceland: Don’t use Flizzr (booked through WOW air).  Use Economy Rent a Car (I booked it through Expedia and it was effortless).  Take the insurance….dents on the car and broken windshields are the most likely isssues you’ll have.  Take the rest of the insurance….volcanic gravel is very sharp and there are barely any guardrails anywhere.  Now having said that, through my lens as a Canadian who grew up driving standard on a gravel road, the driving in Iceland was very easy.  When you go up a mountain and you get stuck behind a larger, slower vehicle, the slow person puts on their indicator to tell you when the road is clear ahead to pass.  Very civilized.  The gravel roads that are long and straight have a speed limit of 90 km.  We started back at Keflavik and effortlessly picked up our friends from the airport and got our new ride for the trip north: a Citroen Picasso wagon.  Super stylin’ and carries 6 passengers!  We had to add a top box to fit all of our belongings but the Economy staff took only 15 minutes to add it and we were on our way.

First order of the day was breakfast though, which at 11:30 am is hard to find.  Let’s face it, you just need to eat what you forage in Iceland, not what you desire.  I had marked Kaffi Duus at the Keflavik harbour as “a good place to eat” so we headed there.  There were options to order a buffet lunch or a la carte so we were all happy.  After lunch we wandered over to see a ship on display and as we did, a tourist ran past me saying “There it is!  What is it?”  My best guess, without a guide along, that it is a minke whale, grazing in Keflavik harbour.  If he hadn’t told me, I never would have seen it.  We learned later in the trip that the tell tale hovering of a flock of birds, often means that they are after the whale’s leftover krill that get pushed to the surface.

Sated for the moment, we headed out to the western peninsula about 2 hours away by car to the Snaefesllsjokull National Park. Every now and then we realize that there is a crucial sign missing. In general, what would improve the tourism greatly in Iceland is more signs. Things to mark where is the bus stop, what is the soup of the day, what time do the gates close, and in this case, what is this thing ahead, how do I get into it and how much does it cost? Nearing the intersection of a divorce with at least 2 u-turns and many arguments later, we all agreed that this apparent land bridge on the map was indeed a tunnel and we needed to go through it.  It’s called the Hvalfjordur Tunnel It’s almost 6 km long and goes under the fjord that separates Reykjavik from the Ring Road #1 which heads north here. It’s an amazing feat of engineering, and if you dig things like that, it’s not to be missed.  It costs 1000 Krona, by the way.  At the north side of the tunnel, you come to a lovely little town of Borgarnes, which happens to have a lovely little bakari kaffihus and is the site of one of the major scenes in The Secret Life of Walter Mitty.  We didn’t know that at the time, but it was really cool to see their devotion to the experience.

The scenery on this drive to the tip of the peninsula just gets better and better.  There are waterfalls everywhere, different types of igneous and metamorphic rock formations and gazillions of ridiculously fluffy sheep.  The sheep and Icelandic ponies (and in the cattle in the north and interior) all graze and wander at will.  In true ranching style, there are just road grates where the animals shouldn’t wander.  Once a year, the farmers get together and herd everything into sorting pens for the winter.  (All in all, after about 2500 km of driving in Iceland, I can count the number of unnerving incidents of roadside animal interaction on one hand. ~ ed.)  Every volcano leads to a lava field leads to some amazing coastal rock formations and Snaefellsjokull does not disappoint. 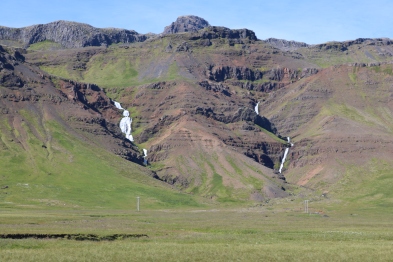 Here’s one of those places where a nice sign with a map would have been handy.  We made the decision to continue around the peninsula following the north side back to the Ring Road and north to our guesthouse in Laugarbakki.  The GPS kept wanting to send us back the way we came and we thought we knew better.  The roads became narrower, but not slower, and we ended up driving in and out of every darn fjord until the sun was near setting (= very very late).  There were no settlements with cute cafes, there were no grocery stores. But it was beautiful.   And long after everyone else in the car had dozed off, I saw a charcoal grey arctic fox.  No I don’t have a picture.  I was driving, silly. Here are a few more pics of our unexpected road trip adventure. 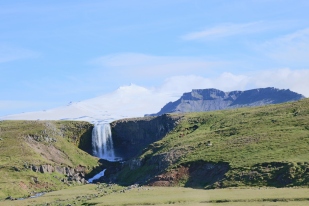 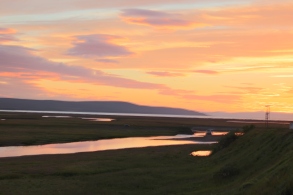 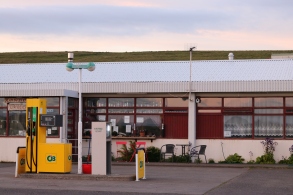 Lastly we checked into our Gueshouse Langafit and the 2 nice female owners took pity on us and let me buy groceries out of their fridge to feed the children: slices of processed cheese, a half loaf of bread, pop and strawberries from the greenhouse up the road.  I made cheese sandwiches  in the kitchenette and we were ready for our bath.  The community has a large hot tub fed by geothermal waters and it is just next door. It was just what we needed.  The rooms were pretty and clean, and when we woke in the morning, we ate waffles covered in jam and whipped cream.  She’s even got a gas pump and a car wash. Amazing hospitality.