One of my favourite things about travelling is how disorienting it can be.  After a quick 5+ hour red-eye flight from Toronto, we staggered out of Keflavik airport in search of our rental car and caffeine.  It felt like standing on Mars surrounded by vast fields of dried lava (I’m sure there’s a technical geological term for that but I’m not there yet).  The buildings are all functional and new but very boxy and lacking in any sort of ornamentation.

The shuttle from the airport to our car rental outlet was easy to navigate but the signage for the car rental is seriously lacking. Still we were on our way in our lousy Opel Corsa in 90 minutes from landing to driving out.  My big first understanding is that  wifi is usually not free in Iceland.  This is going to be tricky as I made that beautiful Google map to lead us everywhere.  We heard about this international SIM card  which would transform my Nexus 6P into our European communication device, but it has proven elusive so I’m operating on wifi and very limited data.  Luckily my Dad was a geography teacher and I not only have a finely tuned navigation sense, but also an iron core which feeds directly off of magnetic north (it gets a little wonky in shopping malls and Las Vegas but generally it’s reliable).

Once we were off we found the driving very easy, like almost as comparably easy as driving in Canada.  We have been interested to find out what the small rodent roadkill is that we keep seeing, but other than dodging free-roaming sheep, it’s smooth and effortless.  The road signs are intuitive, the gas is twice as expensive as in Canada, but we haven’t found anything we can’t handle in the Corsa yet.  We found a coffee shop/bakery open at 7 am and got our fill.

As soon as we were out of the city, we felt that we had to commune with nature right away so we stopped the car and started looking at the miniature worlds of flowers that cover the ground here.  I stepped towards the edge of a cool glacier river to dip a hand and a beautiful white bird started flying towards us…not right at me and I was dive-bombed.  Turns out I had disturbed a nesting area and this little guy, as big as a chicken I swear, was not impressed with me.  After shouting, running away, and having a really good laugh at myself, we progresed up to the highland area.  Here he is.  He’s a mean one.

The first thing we wanted to see was Thingvellir, the site of ancient Viking parliament set in the fissure of the two techtonic plates between the Eurasian plate and the North American plate.  It really set the tone for the first 2 days because it feels alive here, like energy is coursing all around.  It’s easy to see why the Icelandic people have developed many beliefs and customs around the energy of the earth.

Next onto Geysir, the birthplace of the word. which was pretty interesting, but here the magic of the earth has been replaced by tourists.  We liked the restaurant so much…free refills of their soup of the day.  By this time it is early afternoon and the tour buses were swarming so we pushed to stay ahead of them.  Yet we had to check out Gulfoss, a spectacular waterfall, first. 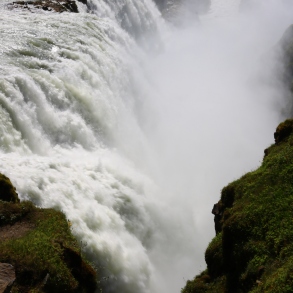 We checked into our guest house midafternoon and fell asleep in the serene sunlight of Iceland’s mid-summer.  The Sacred Seed guesthouse has a beautiful geothermal pool and feels like you’re in the middle of nowhere.  We were very still and very quiet.  We swam in the warm water.  We slept.  It was heavenly and just what we needed.  I’m not going to lie, at 45, doing the red-eye and bouncing back is not so easy anymore.  Sacred Seed was just what we needed to recuperate.  The owner said that our triple room was where his grandmother slept.  It was up a steep ladder/staircase but like a sanctuary once we got there.  It was very basic and the bathroom was downstairs, but we had the quiet we craved. 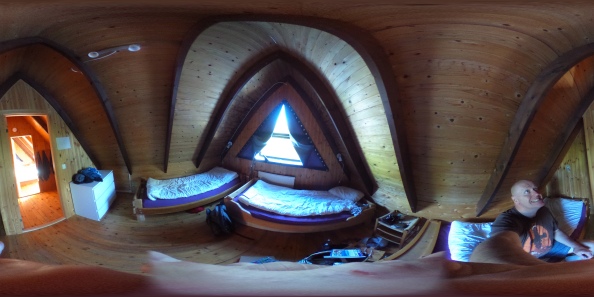