A Game for Swallows: To Die, to Leave, to Return by Zeina Abirached
My rating: 5 of 5 stars

This is such an important book because the voice of young Zeina is so authentic. She doesn’t know that life inside Beirut in the 1980s is unusual as it is as it has always been. The richness of her black and white cartoon-style drawings reinforces the stark contrasts of home life and war. The chronicles of Zeina’s everyday life where city’s infrastructure works intermittently, is juxtaposed with the comic events of her family and neighbours. This book must be in every school library for its art and its voice.

I Remember Beirut by Zeina Abirached
My rating: 4 of 5 stars

In this follow-up to A Game for Swallows: To Die, To Leave, To Return, Zeina takes us into a non-sequential look at the details of her life growing up in Beirut. She isn’t always the young voice represented in A Game for Swallows as her teenage self is developing. She expresses a hunger for new music, and freedom and contrasts this with self-deprecation and humility. Zeina also talks about coming out of the war and realizing with shock that there is a ‘normal’ worth fighting for. Told in the same black and white cartoon style, this book is a great accompaniment to A Game for Swallows, but relies on the reader having read them in order for context.

View all my reviews 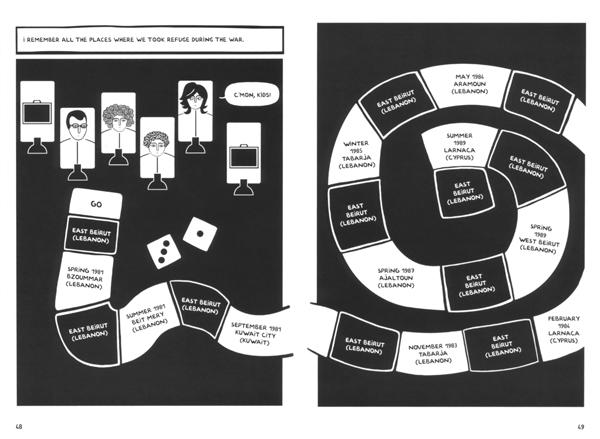