I selfishly chose to read DC: The New Frontier because I’m doing an assignment on DC and I wanted more meat. I’m a self-acclaimed noob when it comes to graphic novels and The New Frontier was my first foray into any superhero comics…..any….ever. This was my first. So I was completely blown away by how emotionally involved I became with the characters as they rushed to find a solution to stop the world from ending. I also found the artwork absolutely absorbing. There were 2 page spreads of one single frame, 2 page spreads split into thirds, and many many more combinations that I had never seen before. I think I may have developed a crush on Wonder Woman. 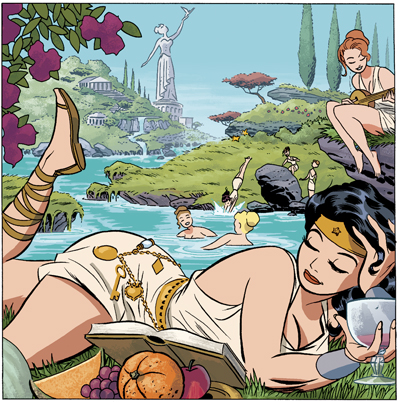 I’m also struck by how accessible this giant book is especially in comparison to the other DC comic I’m attempting: The Watchmen. The New Frontier is told from many many characters’ points of view but they all have a singular focus that brings them together. I will recommend this book to all the readers in my library.

View all my reviews