In case I haven’t said it enough, my interaction with Twitter over the past two years, has been life-altering in terms of how I have come to rely on my online professional learning network for support in my development as an educator.  I have been wishing to bring that same understanding to students, and I have had two opportunities recently to try it out.  Follow along with me as I dissect my social media experiments.

In April, I was pleasantly surprised to get an email from the Student Success committee in our board who wanted a teacher to moderate the discussion between students and actors for the First Light Theatre company’s production of Dennis Foon’s play: War.  The project had merit because every secondary school in the board would receive sponsored busing to the event. I volunteered with two other teachers to give it a shot.  We had four days and eight performances.  The three of us met chez moi for a couple hours to strategize. Various social media tools were suggested including Today’s Meet, Facebook and Twitter. Our only devices we were counting on and carrying were cellphones.  We weren’t even sure of our internet connection in the theatre space and if a projected backchannel feed would be appropriate. So that eliminated Today’s Meet, which isn’t a phone app and requires a solid Internet connection to constantly refresh.  We were aware of making teachers and students comfortable with online interaction in adherance with the Ontario College of Teachers Professional Advisory. We created a Facebook group, which was open, but still required students to request admission.  This was our downfall as students couldn’t check out was in the group before getting interested enough to request admission.  Only nine people joined the group, and seven of those were teachers.  Fail. 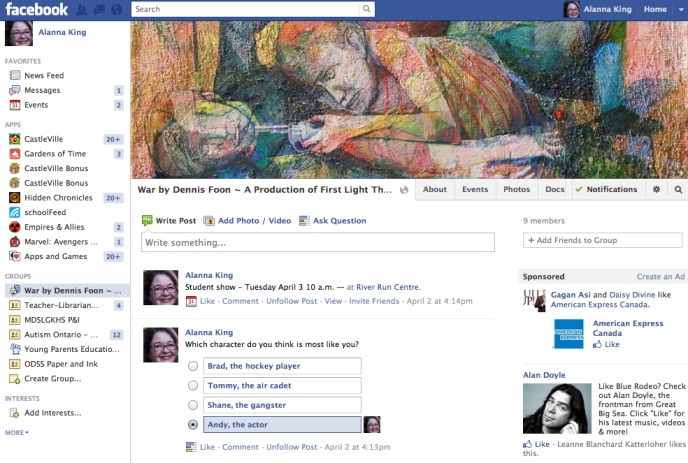 We also created a Twitter hashtag: #fltwar.  This too only had moderate success. Even when bribed with candy students showed little response.

Experiment #2: Moderating discussion at a Q & A with a panel of experts (Teachers as 21st century tools model)

A class set up a panel of speakers to discuss mental health with teens.  The attendance was voluntary, and we knew who would be attending.  We invited both struggling teens and role model teens.  I created the hashtag #mhodss 2 weeks beforehand and made time to spend 30 minutes with each of the attending groups to explain Twitter and to talk about appropriate use.  The most asked question I was asked was “How do you know what to say?” So we even practiced saying something like “I’m very curious as to how Twitter will be used at #mhodss” or “I’m looking forward to #mhodss”.  We talked about the difference between following a teacher or tweeting to the hashtag.  On the day of the event, we used a projector screen not for the presentation, but for the backchannel.  We alternated between just showing the hashtag feed during peak Twitter times and using Another Tweet On the Wall.  We relied on Twitter for stimulating and redirecting discussion.  The topics involved with mental health were very personal, and Twitter gave a sense of anonymity to users.  We even had senior, leadership students offer to tweet for other group members, if they were too shy to ask a question. Overall, we had an amazing Tweetup with about 100 tweets using the hashtag. There was only 1 questionable word (but it was used in context!) and no one complained about being uncomfortable.  In fact, I think the public nature of displaying tweets persuaded more participants to get involved.

Here is the complete Twitterfeed for this event, created by Tweetdoc.  Mental-Health-forum-at-ODSS

Conclusion:  Twitter is completely viable tool for backchanneling at school, but it does require work to make the experience feel accessible and safe for teachers; and worthwhile and meaningful for students.  In recognizing that neither teachers nor students felt comfortable with Twitter and our intent in the first experiment, the accommodations made in the second experiment directly impacted its success.